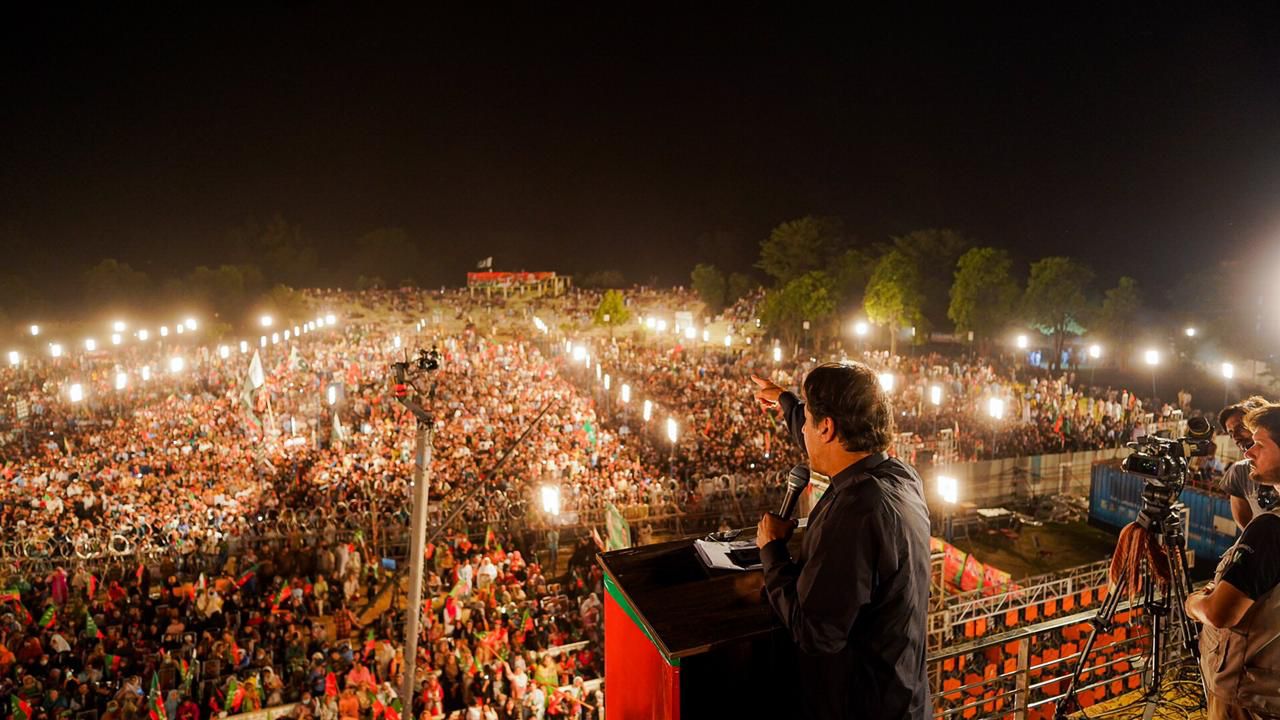 The recent political developments in Pakistan uncover several underlying issues within the government and public spheres. The widespread misuse and abuse of power for political gains and the subsequent corruption within government institutions have led to issues of abuse, misuse, and poor accountability. The issues have had severe impacts on the justice system and the economy. The growing rift between major political parties is occurring at the expense of the already struggling democratic setup.

Though Imran Khan assumed office in 2018 with people's mandate, he faced fierce opposition from opposing political parties. On April 9th, 2022, an eleven-party alliance, the Pakistan Democratic Movement (PDM)brought forth a successful no-confidence motion and Khan was voted out of office. This was the first no-confidence vote to be successfully passed in the political history of Pakistan. The vote of no-confidence was preceded by a constitutional crisis and succeeded by a political one.

What was the Constitutional Crisis?

Originally scheduled for a vote on April 3rd, 2022, the no-confidence motion was abruptly dismissed by the National Assembly’s Deputy Speaker Qasim Suri. While citing Article 5 of the Constitution of Pakistan, which requires all citizens to be loyal to the state and obedient to the constitution, Suri argued the motion is nullified as the opposition acted against the interests of the state by bringing forth a vote of no-confidence at the insistence of foreign powers. This reference was to a diplomatic cable received by Pakistan’s ambassador to the United States which Khan's government claimed contained instructions for PDM to remove Khan through a vote of no-confidence. Following this, President Arif Alvi dissolved the National Assembly.

As per the country’s constitution, a no-confidence motion cannot be rejected, nor an assembly dissolved until the motion has been put to vote. Therefore, many legal experts argued that Suri’s decision to dismiss the motion and Alvi’s dissolution of the assembly was unconstitutional. However, many also dissented to say that the Speaker does hold the power to dismiss any motion not in line with Article 5. Though the problem appeared to be the lack of evidence to support the reasoning of foreign involvement. The discord raised a constitutional crisis leaving the opposition little ground but to move to the Supreme Court against the Deputy Speaker’s ruling.

On April 7th,  2022, the Supreme Court of Pakistan issued a short judgement in which it set aside the April 3rd developments, deeming both unconstitutional. While this move was hailed by many, who saw this as an impartial decision that strengthened the Constitution, qualms were also raised over Supreme Court’s interference in parliamentary proceedings, citing its order to the Parliament to reconvene on April 9th to put the motion to vote, as part of the original judgement. When the National Assembly session delayed voting on April 9th, the Supreme Court and Islamabad High Court were opened late at night to ensure implementation of their decision to hold voting on the no-confidence motion. The move was peculiar and beyond regular proceedings, which raised allegations the Supreme Court acted out of its purview and misused its powers. In the country’s 75-year history, the Supreme Court has intervened and averted many constitutional crises but has also been held responsible for leaving enough ambiguities in its interpretation of the Constitution to serve the political agenda of the executive branch at the expense of strengthening the democracy.

Who is in government now?

The April 9th, 2022 National Assembly session extended past midnight, successfully voted Imran Khan out of office, and voted in Shahbaz Sharif as the 23rd Prime Minister of Pakistan. Shahbaz Sharif is the leader of the political party, Pakistan Muslim League – Nawaz (PML N) and the younger brother of ex-Prime Minister Nawaz Sharif, who is currently residing in London as an absconder. Shahbaz Sharif took the oath on April 11th, 2022, the same day he would otherwise have been indicted in a long-standing money laundering case of about Rs 14 billion laundered from 2008 to 2018, for which he is currently on bail.

Though hailed for his administrative contributions to Lahore when he served as the Chief Minister of Punjab (CM) from 2008 to 2018, there were allegations of corruption, money laundering and misuse of power, including the Ashiyana Housing Scheme scam and the Hudabiya Paper Mills Case. His much-hailed Metro Bus Project – a public transport initiative – later revealed corruption and irregularities of Rs 5 billion, though a full inquiry is yet to be conducted. He has also been accused of misusing authority in the Ramazan Sugar Mills Case where he ordered the construction of a drain to benefit sugar mills owned by his sons, causing a Rs 213 million loss to the national exchequer. Perhaps the most harrowing legacy of Sharif’s tenure as CM remains the 2014 Model Town incident. Under orders from the then CM Shahbaz Sharif and Law Minister Rana Sanaullah, the Punjab Police charged at the crowd of peaceful and unarmed civilian protestors with batons and tear gas shelling before opening fire, which killed 14 men and women and injured over 100. The judicial commission which acquitted officials involved and rejected complaints against political figures was criticized to have been politically manipulated.

PTI’s immediate step following the success of the no-confidence motion was to offer mass resignations. Though submitted, recently the new Speaker of the National Assembly has called a total of 131 lawmakers to verify their resignations before they could be accepted to remove the possibility of coercion. The move was heavily criticized as it meant that PTI essentially relinquished the opportunity to form an effective and powerful opposition in the National Assembly, ultimately harming the political proceedings and democracy in general.

Khan insists on his claim of foreign involvement in his removal stating the western powers did not appreciate his foreign policy shift towards the Muslim states, Russia, and China. He argues that the current government is foreign-backed and does not have the mandate of the people and therefore, not fit to govern. He proposes the only way forward is with early elections.

Khan played to his strength of public support to gain legitimacy for his early election calls, by holding jalsas (political rallies) in cities across Pakistan, where scores of people responded to his call. His massive public support has been indisputable, even by his fiercest opponents. These massive rallies eventually culminated in a ‘march’ to Islamabad on May 26th, 2022, where scores of people poured into the country’s capital from all over Pakistan to register support for Imran Khan and his demands. Multiple illegal raids and attempts of arrests were carried out at the homes of PTI lawmakers the night before the march. On May 26th, 2022 Punjab, Sindh and Islamabad Police blocked all routes leading to the capital and used tear gas (some allegedly expired), batons on civilian protestors and arrested several of them from different cities. This was a blatant disregard of not only the constitutional right of civilians to stage peaceful protests but also in violation of the Supreme Court’s ruling to allow PTI to stage their protest in Islamabad. Fearing a fate like the Model Town Incident, given Interior Minister Rana Sanaullah’s threats to the PTI, Chairman Imran Khan called off the plan to stage a sit-in while remaining firm on his demand for early elections.

What’s Next for Khan and Pakistan?

From 2018 until the no-confidence vote in 2022, Imran Khan, as Prime Minister, launched many public-oriented initiatives including the Sehat Card Scheme: the first-ever health insurance scheme in Pakistan. He also launched the National Poverty Graduation Initiative to uplift the poorest with skills and ease their social mobility in society, the Kamyab Jawan Programme oriented to aid youth in attaining education and employment, the Ehsaas Programme a poverty alleviation and social safety programme and, the Billion Trees Tsunami as an effort against global warming and climate change. His handling of the Covid-19 Pandemic was also praised. Though Khan attempted to increase the tax net, bring in foreign remittances and lower circular debt, the absence of a concrete economic policy, later also admitted by their finance minister, was a glaring mistake on the part of PTI’s first term in government. In recent months, along with the political turmoil, the rise in fuel and electricity prices, drying up of foreign exchange reserves and depreciation of the rupee against the USD has exacerbated the economic situation in Pakistan. For any political party eyeing power, the biggest challenge now is to bring forth and deliver on effective policies for the management of the economic crisis to secure the public mandate for the next elections.

Despite Pakistan’s current political climate, it has come a long way from dictatorial rule and abrogation of the constitution to now relying on the Supreme Court for interpretation of the constitution. Similarly, Khan’s Pakistan Tehreek-e-Insaaf provides hope that grassroots political parties can emerge as a force in an otherwise dynastical democratic setup currently operational in Pakistan. For the political system in Pakistan to develop and strengthen, it is pertinent political parties adhere to the legal and constitutional course available, instead of sabotaging the system for personal gains. Unless the accountability bureaus and other institutes can function impartially without political interference, Pakistan may continue to struggle with similar economic and political woes in the future.