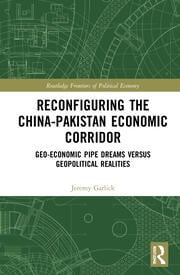 In his latest book, Jeremy Garlick analyses the conceptions and perceptions surrounding the China-Pakistan Economic Corridor (CPEC), the ‘flagship’ project of China’s greater Belt and Road Initiative (BRI). CPEC was initially intended to provide a shorter and potentially safer trade route across Pakistan for Chinese imports and exports which would also serve as an alternative to the existing route via Straits of Malacca. However, over the years, Pakistan’s economic situation and security considerations have dampened progress on the $62 billion project announced in 2017. Garlick argues that CPEC is not really a ‘game-changer’ for Pakistan or the region, rather is more of a geopositional gambit as the project is driven more by geopolitical and security motivations than by economic considerations.

Garlick dives into the history of Sino-Pak cooperation – from shared support against territorial disputes with India to China’s clandestine support for Pakistan’s nuclear weapons program – to show how political considerations play a critical role behind CPEC’s vision which ultimately aims to preserve and bolster this ‘all-weather’ alliance between the two neighbours. To deconstruct the perceptions of CPEC as an ‘economic corridor’ or ‘game-changer’, Garlick quantitatively and qualitatively analysed over 100 most-cited publications for general assumptions and more specifically for terms such as ‘Malacca Dilemma’ and ‘Game-Changer’. Divided into six chapters, the book unpacks existing narratives around CPEC, the reality and myths around the economic considerations, the Malacca Dilemma, geopolitical and security considerations, all culminating into the concluding chapter that shows how CPEC is not the ‘game-changer’ for Pakistan.

First, Garlick shows how it is doubtful that CPEC could serve as an ‘economic corridor’ for the region given how almost all the projects initiated under it are situated within Pakistan. These projects solely focus on boosting Pakistan’s economic, energy, transport, and infrastructure sectors, except for the fiber-optic cable project, which is the only project running cross-border into China. This, Garlick argues, shows how CPEC could be restricted to deepening Pak-China ties and supporting Pakistan’s dwindling economy that has been unable to secure both foreign investors and American aid.

Next, Garlick analyses one of the most significant projects under CPEC, the Gwardar Project, aimed at developing the Gwadar port in Pakistan which would allow China access to the Indian Ocean and port facility for its imports and exports among other benefits. Further, a Gwadar-Xinjiang Pipeline is expected to resolve the supposed ‘Malacca Dilemma’ – a chokepoint in the Straits of Malacca which, if blocked, could hamper 80% of Chinese oil supplies. However, upon closer inspection, Garlick shows how a Gwadar-Xinjiang Pipeline does not appear feasible owing to the difficult Himalayan terrain; a pipeline passing through the mountains would require insulation and supporting structure thus adding to the construction costs. Additionally, alternative routes through Kazakhstan and Turkmenistan to Xinjiang or even maritime routes as opposed to the land route via Himalayan terrain renders a Gwadar-Xinjiang Pipeline rather illogical. Garlick also shows how the port capacity of Gwadar has not increased over the years, which makes its limited capacity unfit for greater Chinese shipments or even for trade in Central Asia. More importantly, the security threats in Baluchistan due to separatist and terrorist elements have, over the years, hindered any substantial progress on the project and have put lives of Chinese officials in danger. Given all the difficulties attributed with the Gwadar project, Garlick shows the significance of Chinese investment by terming their presence in Gwadar as geopositional hedging; the Chinese aim to establish their presence in a relatively strategic location – in this case near the Strait of Hormuz – so that it may prove beneficial against any potential future risk.

Garlick also argues that the lack of transparency with the project, particularly in terms of its financial details, raises doubts over corruption and cronyism. This is further fueled by the fact that an ex-general now serves as the head of CPEC, raising questions on the extent of military interference in Pakistan. Though lack of transparency is not the only trouble with finances; Pakistan’s mounting national debt – which stood at 35.8 trillion rupees (US$228 billion) in November 2020 – together with perpetual shortage of foreign exchange reserves and China's debt trap diplomacy has made it difficult for the country to pay off Chinese debt. Garlick also unpacks various energy and infrastructure projects initiated under CPEC in Pakistan to show how, even if the said $62 billion is invested under CPEC, the amount is too small to create a significant difference; further casting doubt on whether CPEC is a ‘game-changer’ for Pakistan.

The book very succinctly maps out the internal dynamics of Pakistan from the military influence in politics to separatist trouble in Baluchistan and its dwindling economy to explain how various factors impact CPEC’s vision and execution. Garlick's extensive research and meticulous analysis is evident as he challenges prevalent assumptions and perceptions regarding CPEC existing in literature and in media. Garlick offers a fresh and distinct perspective on why CPEC should not be considered a ‘game-changer’ and how instead it has become a source of “excessive debt, elite corruption, and poor outcomes for Pakistan’s economy and people”.