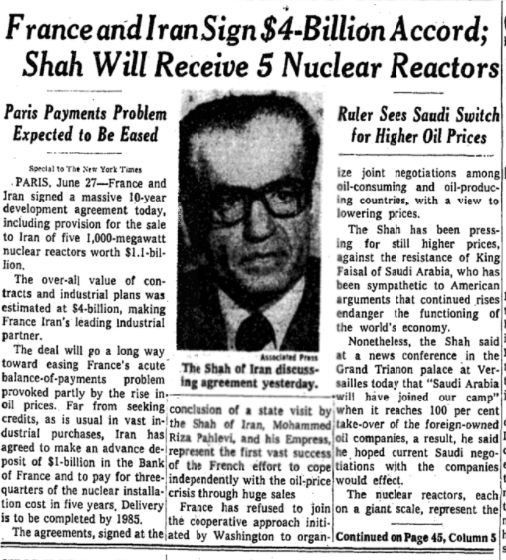 How often do we consider nations with glorious histories tend to live under the constructed shadow of their past and continue a collective sense that is tangible yet sophisticatedly laying behind layers of time? Is it correct to assume the roots of Iran's nuclear program are somehow attached to reviving its past? What are the main differences between pre and post-1979 Iran and its nuclear development policies?

The issue appeared in the public debate a few years after Mohammed Reza Shah Pahlavi came to power in 1944. The latter, who studied in Switzerland, developed a western attitude enriched by power aspirations and ideals of modernization. In this project, the nuclear program has always been present. For Shah, modernization necessarily passed through the implementation of a nuclear program. First, Shah intended to give his country a real energy alternative, not forgetting that nuclear weapons could give a strong international legitimacy: a powerful state, a state capable of defending itself, is a compelling state and a state which is able to develop its regional influence. Moreover, the program could give birth to a process of technological and scientific progress, increasing the power of the country through investments in new researchers. With the 1979 revolution and the change in the alliance system, Iran remained isolated and the nuclear program was suspended.

The decision of resuming the nuclear program has been guided by the will to conserve independence from other powers, intensify the distances from the United States, and start the first net of relations with its neighbours from a strong position of power. The government started gradually to intercept the feeling of the elite and of the public that the nuclear strategy crystallized the regional position. In other words, nuclear power could give to Iran not only a decisive international bargaining leverage but mostly a stabilizing tool in domestic politics. In some way, the perception that  the Iranian people could have of the government and of its action could have been influenced by the ideal of a political elite capable of taking strong decisions. The Iranians would see the development of a nuclear program as an ambitious project enabling the country to develop a strategic aim and enhance its regional influence. From this element, some scholars have claimed that a new uniting consensus aroused around the nuclear pact, allowing the executive power to gain a wider leeway. Scholars have argued that the main reason that pushed Iran toward a nuclear program was deterrence. In this reconstruction, a primary role is played by the War against Iraq, which must be analyzed in a wider context. The war broke out after 1979 when Iran was isolated, and Iraq exploited the opportunity to improve its relations with the US. Such an attack, which engaged Iran all of a sudden, found it unprepared and taught to Iran the importance of appearing strong and resistant.

However, it could be claimed that deterrence is a dangerous strategy and that Iran in this way could face enormous risks in challenging the international community in such an open approach. Nonetheless, among the political elite, a decisive idea has spread and motivated the choices of Iran: if Iran goes beyond the imposed threshold, the international community will accept it. This has been a compelling argument that animated the internal debate about the nuclear program. In the international non-proliferation agenda, Iran’s nuclear program has been placed as a priority security issue: the consequences of a nuclear Iran, in the fragile region of the Middle East, could trigger threatening outcomes. To counter such a threat and identify the main efforts to be undertaken to address it, studies have focused on understanding the causes behind Iran’s nuclear aspirations. Realism has been the predominant international relations theory for this purpose. Yet, an opposite analysis has placed constructivist interpretations at the center of the debate.

In constructivist views, the revolutionary values associated with the regime are linked to the development of the nuclear programme. As such, normative factors have been proposed as the elements behind the Islamic Republic of Iran’s foreign policy. Mahdi Mohammad Nia has argued that, since 1979 brought the clerical regime under Ayatollah Khomeini to power: The Iranian nation has been dominated by a revolutionary ethos and this has been translated into its foreign and security policy. Consequently, Iran's nuclear aspirations should be looked at through the lens of this discourse.

This discourse involves the aim of the Islamic Revolution. Through such, the regime has been seeking to reaffirm its independent, anti-western, anti-hegemonic, and anti-colonial nature. The nuclear weapon would therefore fulfill these values. It is in this same argument that Homeria Moshirzadeh shows how the main discourses of justice, independence, and resistance are profoundly ingrained in the constitution of the identity of the Islamic Revolution and that therefore gaining nuclear weapons. Constructivists aside, realism continues to dominate the analysis of nuclear Iran. In fact, the security dilemma is still sought as an important motivator. According to Shaheen Akhtar and Zulfiqar Khan, the regime’s perceived threat from the not-so-distant Israeli nuclear weapons would continue to act as an urgent security threat and that within an anarchical order, where Iran itself acknowledges its vulnera

Overall, the role of domestic politics, thus in conjunction with both theories, remains prevalent in scholarly analysis. Shahram Chubin and Robert S. Litwak for instance have argued that the question of nuclear development in Iran is rooted in domestic politics and that efforts to address the regime’s aspirations must look at the nuclear debate within the Iranian public. It is essential to conclude that in the current frame of international relations particularly the Middle Eastern dynamics of power development of a nuclear program is not justified yet understandable. By comparing the cooperation once held before 1979 between Iran and the international community and the bitter hostility that gradually developed after the revolution it is important to focus on the role of the agent, not the context.