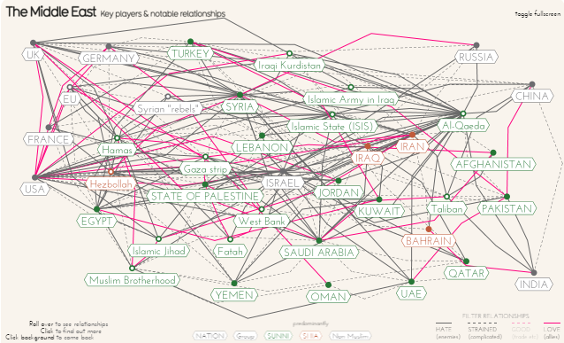 Without doubt, security is the first and fundamental objective of governments involved in the building of a sustainable regional security in the Middle East but it is not the only one. On one hand, different actors are cooperating to counter the Iranian threat and the affiliated militias. On the other hand, multilateral cooperation is taking a way forward from the mere security interests, while economic and thus political aims are now being prioritized. One of the things that emerged  especially in the last 20 years, is that the US role in the region is vitally important but it works much better when it is done through multilateral efforts of allies. In an ideal World one would see the inclusion of Russia and China in this multilateral work, but if not, it is up to the countries of the region, the US, the EU and other willing actors to try to take action to address the regional challenges. Up to now military action has played an important role—through aviation, maritime and border security; but we are moving toward an increased non-military cooperation.

In Middle Eastern minds, a unified front would play a decisive role in dealing with major fundamental challenges that are undermining the regional stability, such as Iran. Nonetheless, such unified front would not only look at allies, but would strive to include enemies too. Saudi Arabia and Iran informal talks are a clear proof of how the two want to avoid a collision that would destabilize their respective systems of power.

In this frame, the Middle Eastern geopolitical scene has been shaken in recent years by a completely unexpected, almost paradoxical, convergence such as that between Saudi Arabia and Israel. In this case, the most significant episodes were perhaps the apparently repeated meetings, between 2016 and 2018, between the influential Saudi prince Turkī al-Fayṣal, former head of the secret services, and Tzipi Livni, co-secretary of the largest Israeli opposition party, together with General Amos Yadlin and his colleague Ya'akov Amidror, formerly head of military intelligence and National Security Advisor. Since those years, an intelligence-sharing program has begun between Saudi Arabia and Israel to monitor both the pro-Iranian non-state actors in the region, from Ḥizbullah to the ḥūṯī, and the advancement of the Iranian missile program.

In Riyadh, the hope is that Israel—through its influence on groups in Washington—will be able to coordinate robust pressure on the US political establishment to activate containment of Iran, by introducing or re-imposing sanctions, and possibly helping to reactivate Washington's commitment to defending the interests of all its traditional Middle Eastern allies. The Saudis therefore offered new demonstrations of loyalty to the United States, including a willingness to open a new chapter to secure Israel's future in the region.

Such normalization reflects nothing but the footsteps traced by Obama, Trump and Biden’s presidencies to leave responsibilities to local actors whenever US interests are not at stake. Also, it reflects a profound need for a sustainable regional security system that could develop simultaneously to the creation of ties of political and economic-financial nature and access to resources. An example is the announcement of the giant Dubai Port (Dp) World that it intends to settle in the Israeli port of Haifa or the maritime expansion strategy of the United Arab Emirates. This demonstrates a need for new funding and space to stay afloat in a crisis environment.

In this sense, the "Abraham Agreements" go toward this direction but do not come out of nowhere, in that  they represent a tactical convergence between the interests of the actors involved. The Arab Gulf countries, including Qatar and Oman, have been cultivating economic-financial, intelligence and security relations with Israel for years, behind the scenes or in a semi-formal manner.

In 2015, the Emirates granted the Jewish state to establish diplomatic representation at the International Renewable Energy Agency based in Abu Dhabi. Together with Egypt, Qatar has been the main mediator between Hamas and Israel for years. In 2018, Oman formally received Israeli Prime Minister Benjamin Netanyahu. In the same year, Saudi Crown Prince Mohammed bin Salman said in an interview that Israelis "have a right to have their own land" and that Saudi Arabia "has no problems with Jews". Also in 2018, Bahraini Foreign Minister Khaled ben Ahmad Al Khalifa even went so far as to take Israel's side against Iran. Commenting on the umpteenth air raid in Syria attributed to the Jewish State Air Force against alleged Iranian military bases, he stated that "Israel has the right to defend itself and eliminate sources of danger".

If the Turkish threat is added to the Iranian one, the Jewish state could be—together with Russia—a new factor of protection. Behind the curtain of the agreements also hides Saudi Arabia. If Bahrain has signed an agreement with Israel, it is because Riyadh has given the green light. Saudi Arabia then granted the opening of its airspace to air links between Abu Dhabi and Tel Aviv. To do more, Mohammed bin Salman must wait to formally take power, so that his father - the over eighty and sick King Salman - passes away. Mohammed bin Salman’s ambition is to become the protector of all the holy places of Islam. Science fiction, at least for now.

Is this frame a solid basis for a sustainable regional security system? It is too early to answer and in the following 20 years changes will shape a new frame. As presented in this article,  advances have been made and different actors are building a new unified front. Nonetheless, unanswered questions still remain. One of this concerns Iran and the future of the JCPOA. Should a comprise be found, and sanctions reduced, the unified front will undoubtedly accommodate the US. Nonetheless, the JCPOA works have proofed to be a failure in the past, and unexpected outcomes cannot be excluded. Moreover, the JCPOA will not be enough to tackle other issue but the nuclear one. While allies are talking to each other, and enemies are being included in such dialogue, religious and ethnic differences won’t be easily overcome through politics and economics.