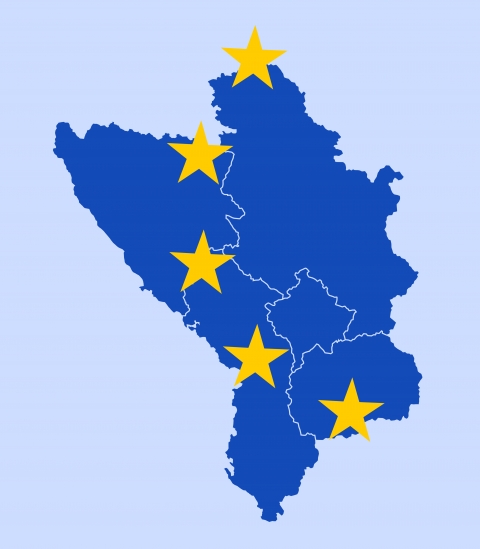 In general, when we think of security we consider the fields of conflict resolution and prevention, crisis and catastrophe management, espionage, and military. However, this concept can be interpreted in a variety of ways, including economic security. Although there is not a unique definition of Economic Security, it can be described as individuals, households, and communities' ability to meet their basic needs in a sustainable and dignified manner. The notion is crucial when it comes to Western Balkans (Albania, Bosnia and Herzegovina, Kosovo, North Macedonia, Montenegro and Serbia), as it is one of the greatest issues the region is currently facing. Organized crime, unemployment, poverty and democratic deficits have been threatening the stability of the area for many years.

In this article, we are going to highlight which are the main challenges in the Western Balkans’ Economic Security, in order to understand the security perspectives of the region.

One of the major threats the Western Balkans are currently facing concerns the labor market, at the point that also in times of economic growth of the region, the recovery is often jobless. In fact, all countries of the area have high unemployment rates, especially when it comes to women employment. Nonetheless, the most challenging issue in Western Balkans’ labor market is the youth unemployment rate, which is one of the highest in the world. There are several reasons for the soaring unemployment rates in the area, among which the inadequacy of the supply of skilled labor, as many people, especially the youths, lack an appropriate education, and political instability..Consequently,decision-makers are prevented from implementing medium-terms strategies and foreign investments are not encouraged.

Another obstacle that threatens the Western Balkans’ economic security is the democratic deficit that characterizes the area. As stressed by the outcomes of the 140th session of the European Committee of the Regions, democracy in Western Balkans is currently facing several challenges, including a limitation of press freedom, a refusal to recognize genocide and war crimes, unsettled territorial disputes, leaders' and ruling parties' authoritarian tendencies and a fragile democratic culture. In particular, one of the greatest dangers of local democracy is the “local state capture”. In other words, Western Balkans are affected by influential individuals or groups that use corruption to manipulate a country's policies, rules, and economy for their personal gain.

Unfortunately, corruption plays an unfortunate role in the governments of the majority of Western Balkans’ states affecting the everyday life of peoples. Albania and North Macedonia, however, have earned the title of frontrunners in the fight against corruption, registering the fastest progress in this field and thus giving hope for a future in the EU. In fact, countries wishing to join the EU need to have firstly stable institutions that guarantee democracy, the rule of law, human rights and the respect for and protection of minorities; secondly, a functioning market economy and the capacity to cope with competition and market forces in the EU; lastly, the ability to take on and implement effectively the obligations of membership, including adherence to the aims of political, economic and monetary union.

Albania has yielded great results in the fight against corruption through a vast vetting process of the members of the judiciary and administrative bodies. This process thus shows to be pivotal to the restoring of public trust in law enforcement bodies of the State. North Macedonia has continued to consolidate its track record on investigating, prosecuting, and trying several corruption cases, including high-level cases. Moreover, the country has been strengthening its institutional frameworks in the fight against corruption, particularly the SCPC and the Prosecutor for Organized Crime and Corruption (OCCPO). Other countries, on the other hand, such as Bosnia and Herzegovina and Montenegro have not delivered as expected, and corruption even at the highest echelons of power still remains a large-scale problem.

In conclusion,''Considering all the information above, what can be done to further reinforce the Western Balkans' economic Security?'' The countries in the Western Balkans region welcome investments needed to improve their infrastructure projects and this eagerness makes them vulnerable to regulatory capture via Foreign Direct Investment (FDI), loans and grant money. Shoud the EU not provide what the Western Balkans have long asked for, they will likely turn to non-EU actors for investment funds, such as Russia, Turkey, China and even the United Arab Emirates (UAE). These influences by non-EU actors have been more so influential during the COVID-19 pandemic and the consequent need for medical supplies and vaccines.

Dr. Valbona Zeneli trusts in regional cooperation between Western Balkans and the European Union as a beneficial tool for the stability of the region.This is because it would cease the perplexities of foreign investors but the prolonged accession process and the critical convergence with richer EU countries have contributed to a plunge of public support for the EU. It is important to remember the geostrategic position and role of the Western Balkans for the EU: in fact, as integral part of the natural European continent, any destabilization in the Western Balkans can quickly become a problem for Europe. With this key factor in mind the EU has two choices, according to Dr. Valbona Zeneli: treat the Western Balkans as the key strategic asset the region represents, or let Moscow, Beijing or the Gulf Countries influence domestic and regional relations.