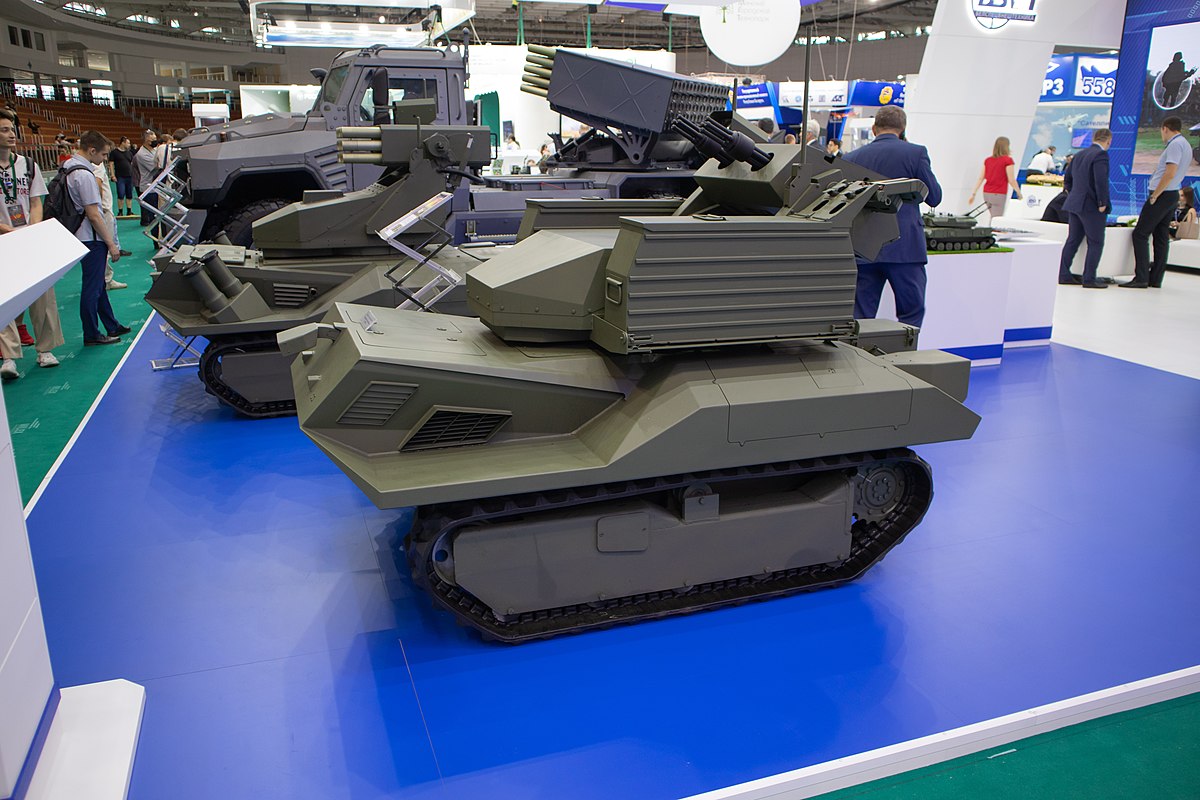 The implementation of Drone Warfare in Modern Ground Operations

The history of Unmanned Ground Vehicles

Despite the common public image of drones as hi-tech military assets, ground drones have a history dating back to the Second World War. The first type of Unmanned ground vehicle was deployed during the Winter War between Finland and the USSR in 1940 and the early phase of operation Barbarossa. The TT-26 was a teletank, a wireless remotely controlled unmanned tank. It worked via a control tank that would control the vehicle at a distance between 500 m and 1.5 km. The control tank was meant to stay back and grant fire support while maneuvering the teletank against the enemy. In case of malfunction, or any condition that would allow the capture of the vehicle, the control tank had to destroy the TT-26. Even older was the use of remotely controlled vehicles as bombs, since, during the First World War, the French developed the Crocodile Schneider Torpille Terrestre as mobile explosive against enemy trenches, later redisigned by the French veichle designer Adolphe Kégresse in the 1930s. Kérgesse technology was acquired by the German forces after the invasion of France of 1940, making it the base model for the Goliath tracked mine.

The Goliath, together with its advanced version Springer and its heavier version the Borgward IV, was used massively by the Wehrmacht in all fronts, beginning in early 1942. However, they were expansive, slow and vulnerable to small-arms fire, too big to be carried by soldiers and with poor ground clearance, a common issue to the Anglo-American counterpart of the Goliath. Nevertheless, it managed to become the most advanced Unmanned Ground Vehicle of its times, laying down the premise for the contemporary ground drones. Despite their original nature as offensive weapons, during the second half of the XX century the first modern Unmanned Ground Vehicle was developed as explosive ordnance disposal. During “The Troubles” in Northern Ireland, the British army deployed the Wheelbarrow Mk 7 in order to reduce casualties in the soldiers ranks, which were caused mostly by improvised explosive devices of the Irish Republican Army.

The development of Unmanned Ground Vehicles and their multiple purpose

In the recent years, there has been considerable improvement in Research and Development (R&D) in the field of electric vehicles and their overall capabilities. These technologies had a relevant impact on the Unmanned Ground Vehicle (UGV) in warfare. Nowadays, the UGV can carry out many complex tasks and is becoming a real resource for the armed forces of various countries. The UGVs are classified into two broad types: autonomous and remotely operated.

Due to this evolution the machine can be used for multiple purpose such as:

In 2015, Russia’s military Industry Committee announced its objective of deploying 30 percent of Russia’s Kinetic weapons on remote-control platforms by 2025. In fact, in May 2018, the Russian military revealed it had combat-tested its Uran -9 Robot Tank in Syria for surveillance and counter-terrorism purposes. Respectively, in 2019, the United States’ Army held a major prototyping competition for developing robot combat vehicles which would provide the country with an unqiue edge. The US had in fact deployed on the frontline small UGVs like the Foster-Miller TALON and its successors, but is working on the construction on bigger UGVs like the Ripsaw. Many military experts are describing the coming year as “the year of the armored vehicle” due to the increasing competition between these countries.

Even though the Chinese government has focused on the improvement of his fleet, it has already built  a new type of UGV, like the new model SHARP CLAW 2, which can be filtered with a range of accessories, included weapon, robotic or sensor system and can be armed with a remote controlled gun carriage. In Europe, however, few countries, such as Germany and Estonia, decided to improve and invest in the UGV projects.

The Estonian government aims to build and maintain an efficient export-based high-tech Europe-wide defence sector by encouraging cooperation between the Estonian Armed Forces and the country’s defence industry. Milrem, an Estonian robotic vehicle manufacturer, is this ambition’s best example, particularly with its THeMIS vehicle (short for Tracked Hybrid Modular Infantry System). The so-called “pocket tank” was designed to play a variety of roles, from logistics to reconnaissance. To go even further, the vehicle should also be able to support ground forces directly in combat, as the unmanned ground vehicle could be integrated with weapons and devices from other defence manufacturers.

Milrem is not the only actor in the UGVs market in Europe; the German manufacturer Rheinmetall Defence is an interesting counterpoint. Despite not being part of the PESCO-funded industrial consortium, the firm has been busy developing new ground robots which ought to support soldiers on the battlefield as well. In November 2020, Rheinmetall unveiled its most recent project: the Mission Master Unmanned Ground Vehicle. According to the company, the vehicle was created for delivering “high-risk scouting missions and deliver a real-time common operating picture without putting soldiers in danger”, by using 360° camera, infrared technology and 7.62mm guns controlled from the weapon’s station. The Dutch army recently received some of Rheinmetall’s UGV prototypes for testing, while the United-Kingdom ordered four of them as part of its Robotic Platoon Vehicle Programme.

Despite the reliability issues, in primis the vulnerability to EMP and software viruses, that prevent the fully automatization of ground warfare, the UGVs have indeed changed the face of warfare. Their use for ordnance disposal, recons, and in general for support to infantry and tanks will be surely expanded in the near future. In Western countries UGVs will be massively implemented in order to reduce human casualties and drop the political cost of military missions. Naturally, if their cost would drop considerably, we could foresee “pocket divisions” that could be rapidly deployed in different battlefields and controlled via encrypted communications in the most technological advanced armed forces.