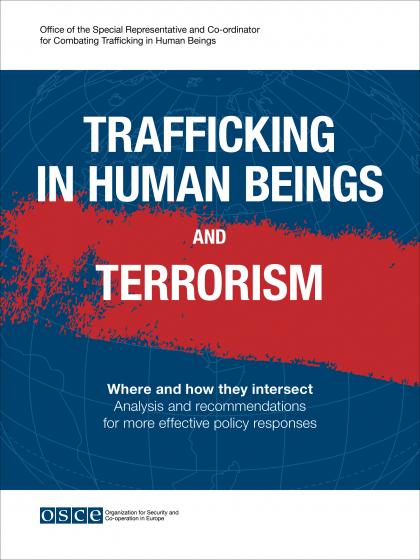 Analysis of the nexus between Human Trafficking and Terrorism.

This is a critical commentary of the research paper launched by the OSCE Organization: Trafficking in Human Beings and Terrorism. Where and How They Intersect: Analysis and Recommendations for More Effective Policy Response.

Human Trafficking as a tactic of terrorist groups

Over the years, human trafficking has increasingly become a modus operandi used by terrorist groups to finance and carry out their activities. To this extent, as human trafficking constitutes a crime that is usually perpetrated by organized criminal groups, some scholars have stressed that the “crime-terror nexus” implies that both criminal and terrorist organizations might cooperate with each other in the furtherance of their respective goals. Despite the increasing use of organised crime-related tactics deployed by terrorists, in analysing the current legal framework in international law when it comes to trafficking in human beings and terrorism there is still no existing treaty or convention dealing with the nexus between the two phenomena. On the basis of the OSCE paper launched in 2021 on the nexus between human trafficking and terrorism, this article will try to critically evaluate from a juridical and legal point of view the analysis and findings developed by the OSCE on this matter.

When it comes to the definition of the human trafficking’s legal framework, it is worth emphasizing that it was not until 2000 that a first definition of trafficking in human beings was given in the Protocol to Prevent, Suppress and Punish Trafficking in Persons Especially Women and Children, better known as the Palermo Protocol. The adoption of the Protocol can be considered as a watershed moment for the legal framework of human trafficking: as of today, it counts 173 signatory States and it can be defined, thus, as almost a universal ratification. A further key role in combating human trafficking is played by regional trafficking treaties, which complement the obligations upon signatory States, especially with reference to victims’ protection. Indeed, as stressed by the OSCE research, a major principle guiding anti-trafficking legislations and policies is the principle of non-punishment of victims of trafficking, according to which Member States are obliged to «assess the individual situation of persons released from the captivity of armed and terrorist groups so as to enable prompt identification of victims of trafficking».

On the other hand, the international legal framework related to terrorism and counterterrorism is considerably more challenging and complex in comparison to the anti-trafficking international legal system. Indeed, despite the existence of a set of treaties, protocols, conventions, Security Council Resolutions, as well as “soft law” and non-binding mechanisms, there is no comprehensive instrument providing a universal and accepted definition of terrorism, as it is the case for human trafficking with the Palermo Protocol.

In analysing the nexus between these two phenomena, it is of utmost importance to emphasize the constituent elements of trafficking used as a tactic by terrorist groups. Pursuant art. 3 of the Palermo Protocol, «Trafficking in persons shall mean the recruitment, transportation, transfer, harbouring or receipt of persons, by means of the threat or use of force […] to achieve the consent of a person having control over another person, for the purpose of exploitation. […]». This very intense definition provided by the Protocol, shows three main constituent elements of human trafficking: action, means and purpose.

Therefore, as the OSCE outlines, in evaluating the link between trafficking in human beings and terrorism from a legal perspective, a useful approach would be one that analyses these three constituent elements when exploited by terrorist groups as a tactic to recruit individuals. In this regard, the analysis of the current legal framework on the nexus between the two crimes shows that a harmonisation in the criminalization of terrorism and human trafficking as two offences connected has not been reached yet. Indeed, despite the existence of several instruments that recognize the growing links between terrorism and transnational organized crime, the lack of a definition of terrorism still hinders the internationally community to adopt an internationally agreed-upon approach to terrorism matters, while it is not the case for human trafficking.

The legal response that has been adopted so far to address cases where the two phenomena intersects has largely focused on criminalizing all individuals related to terrorist activities and groups. The lack of a definition of terrorism has led States to adopt different measures aimed at only criminalizing terrorists and not identifying and protecting victims. Therefore, as highlighted in the research, this approach has showed to have significant consequences for victims, who have risked being held fully accountable for all the crimes they have committed, even though they are victims of human traffickers. Based on these findings, the OSCE research concludes that a human trafficking lens when dealing with terrorist criminal offences should be applied to contribute to victim identification, assistance, rehabilitation and reintegration, and prevention of re-victimization. Therefore, it would be of utmost importance to apply the principle of non-punishment - that already exists in the human trafficking framework – in the anti-terrorism existing legal and policy mechanism.

This critical commentary has analysed from a legal perspective the comprehensive research carried out by the OSCE organization on the nexus between human trafficking and terrorism. It has highlighted how the application of anti-trafficking mechanisms, including the principle of non-punishment, in the context of terrorism could help leading in a better way prosecution of criminal offences related to terrorism. The OSCE research might constitute the basis for an international and agreed-upon definition that considers both a security-oriented approach to prevent and prosecute terrorist offences and a human rights-based one, ensuring that victims of terrorism – and trafficked persons exploited by terrorists – are not held accountable and can access to their rights.

All in all, the OSCE research offers significant food for thought and, using concrete cases, helps filling the knowledge gap of policy makers, academics, practitioners, and legislators on the nexus between human trafficking and terrorism.