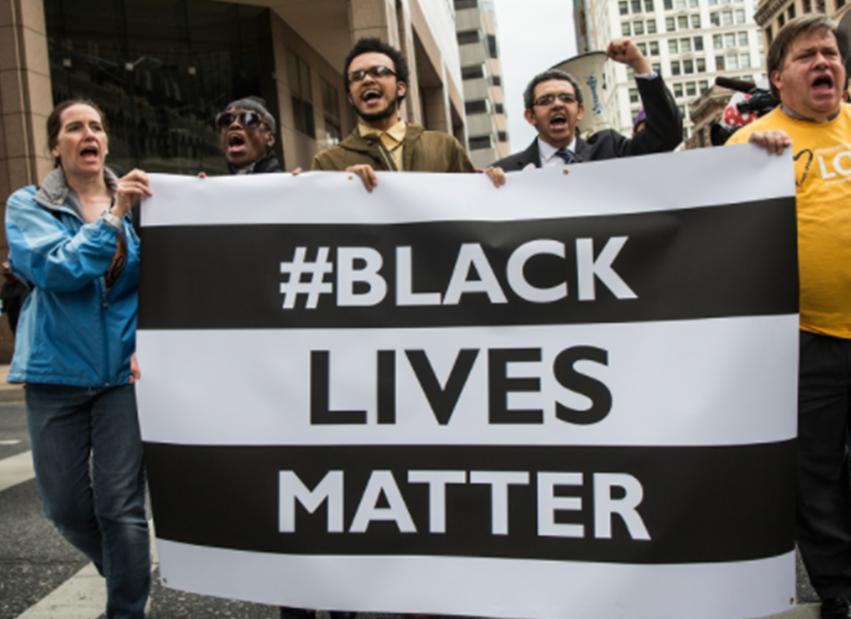 From a Hashtag to a Trans-State Insurgency: Cyberspace and the Antiracist Movements

By: Julia Hodgins and Leigh Dawson.

In July 2013, Patrice Cullors, Alicia Garza, and Opal Tometi created and tweeted the hashtag #BlackLivesMatter, in response to the acquittal of George Zimmerman, accused of killing Trayvon Martin, an unarmed African American teenager. Unlike social movements before it, #BlackLivesMatter reawakened the collective memory of racial oppression using a new medium – social media. This hashtag has become a referent to highlight multiple cases of African-American citizens killed by police officers in the USA. According to The Washington Post’s database, roughly 1252 were killed by police between January 2015 and July 2020. This social and cultural movement is iconic of the oppression that African-Americans have and continue to endure in USA – much of which is rooted in America’s slavery past.

The increased accessibility and connectivity of cyberspace made it possible for a seemingly mundane event to reach a global audience; a phenomenon, prior to the advent of internet, restricted to those with enough social capital that remained part of the public agora alone.

Today, non-state actors – particularly individuals and civil collectives – connect online under less complex rules and often without punishment. Although, some states, like China and former Soviet nations, heavily regulate and redact content its population can see and engage with online. The legal framework and its enforcement practices often do lag in relation to cyberspace’s exponential growth and innovation, enabling non-state actors to maximize their exchanges – in quantity and quality – and by extension, wield outside of their local networks.

The unprecedented speed and outreach capacity of social media foster an unparalleled amplification power, turning cyberspace into a transformative domain that enables communities of shared experiences or beliefs to amalgamate into influential worldwide trends. Increased interconnectivity leads to a new level of collective interoperability, benefiting individuals and groups directly by growing their social capital through these exchanges. Citizens ‘live’ as both virtual and kinetic personas connected in one living macrostructure alongside public and private networks, collective spaces, and the content these all produce. As an unintended consequence of the dynamics within cyberspace, persistent disruptive social processes have found new ways to create tangible influence; this is what happened with #BlackLivesMatter.

Support networks between people, and the sense of belonging shaping them, are timeless. Just as centuries ago, today humans associate in search of mutual help, of spaces to share feelings, of making sense of their lives by revisiting their past and imagining their future. Part of this collective memory is shared grief, and remembrance. There is not, however, a natural link between collective memory or indignation, and cyber connectivity. How did collective memory migrate online?

Large-scale, corporate, non-state actors dominate cyberspace, and their influence sponsors the proliferation of smaller non-state actors; as Singer and Brookings state, “For all the talk of ‘community,’ these platforms are businesses.” Following the inception of cyberspace, social media companies grew and profited by offering online community spaces to individuals, civil collectives, and smaller business, either free or at a tiny fraction of office expenses and thereby connecting physically remote individuals through smartphones, computers, tablets, and other devices.

The number of Internet users has grown from 2.6 million in 1990 up to 4.66 billion in 2021, according to ourworldindata.org and Statista. The agency and power each actor have is uneven, and in most cases inferior to states’ power based on budget and influence, but the devil is in the detail. Cyberspace has enabled individuals to connect and share voices beyond borders, the interplay of online activity and offline creates a tangible social impact in a way that has altered the relationship between themselves and the state within cyberspace, though states do remain dominant offline.

While corporate actors reign in cyberspace, countless smaller non-state actors have gained traction and agency through mass leverage of their voices, thereby creating new patterns of social forces which challenge the status quo with diverse impact on power asymmetries.

That is how antiracist movements became a global movement for justice; the killing of George Floyd triggered colossal indignation, and spurred memory trips to similar events prompting the #BlackLivesMatter tweet, activated by pain, hopelessness, and rage deriving from both the remembrance of lost loved ones dead on the hands of racist police brutality, and historical struggles. As online activity continued trending, protests were replicated across the planet and headlines covering them increased, which reinforced both online activity and street protests; these two incorporated new cases of black citizens killed in similar ways. In Jay Winter’s words, “Suffering [was] democratized,” thanks to cyberspace. Winter also argues that such shared grief migrated geographically and intergenerationally; this double-dimension migration brought to the forefront a sentiment of restitution expressed in multivocal stories shaping a worldwide demand for social justice and equality. A paramount example is the video that Darnella Frazier, a 17 year-old high school student, spontaneously recorded when witnessing the arrest and asphyxiation of Mr. Floyd. Her video went viral after she posted it in Facebook in May 27, 2020, and was of essential value during the trial that convicted Derek Chauvin, the officer whose knee suffocated Mr Floyd. Ms Frazier stated that “she felt she has to document it.” The video later earned her a Pulitzer Special Citation and has been attributed as responsible for the rebirth of the civil rights movement.

Ms. Frazier’s video ignited feelings of grief and indignation around Mr. Floyd’s killing worldwide, which aligned in real-time clusters of social unrest that were geographically scattered but connect via tags, retweets and likes, thus, strengthening their activities. This collective remembrance later connected with the hashtag #BlackLivesMatter – active since 2013 – lending it new salience. Once hashtag and meaning were articulated together, the movement gained unprecedented momentum and aligned multiple antiracial protests within the USA and abroad into what Colin Gray forecasts in Another Bloody Century (2006); an intra-state and trans-state conflict. It also resembled David Kilcullen’s definition of irregular warfare, as memorialisation and social insurgency interplayed between urban settings and online venues.

Historical patterns of domination at the root of persistent social inequality, which are based on an assumed – yet not factual – racial superiority, have survived within many nations in the shape of systemic racism, fuelling counternarratives between state(s) and protesting groups. During the upsurge of this antiracist social insurgency, American President Donald Trump was at war with protestors and deployed the National Guard to help local authorities regain control of their cities after rebels hijacked the peaceful protests and began destroying businesses. UK Prime Minister Boris Johnson delegitimized marches by calling them ‘thuggery’; and, the former Royal Canadian Mounted Police Commissioner Kristy Kirkup neglected the systemic racism blatantly present within the federal police force and other societal systems across Canada. The hashtag #AllLivesMatter, began circulating across the same channels, attempting to delegitimize #BlackLivesMatter, a Conservative response rooted in counterinsurgency tactics, arguing that everyone’s life is important, but failing to include the elements of structural racism at the heart of the BLM movement on it.

The Black Lives Matter movement has shone a spotlight on more than two centuries of racial inequality and structural racism that had been allowed to proliferate in the USA, and across the world, unchallenged. The movement empowered youth, connecting them with historical grievances of their ancestors and those of today that still shape societal relations, locally and globally. However, #BLM’s collective memory and remembrance would not have turned into this trans-state uprising reaching worldwide prominence, without the transforming power of the horizontal amplification and vertical proliferation that cyberspace provides.