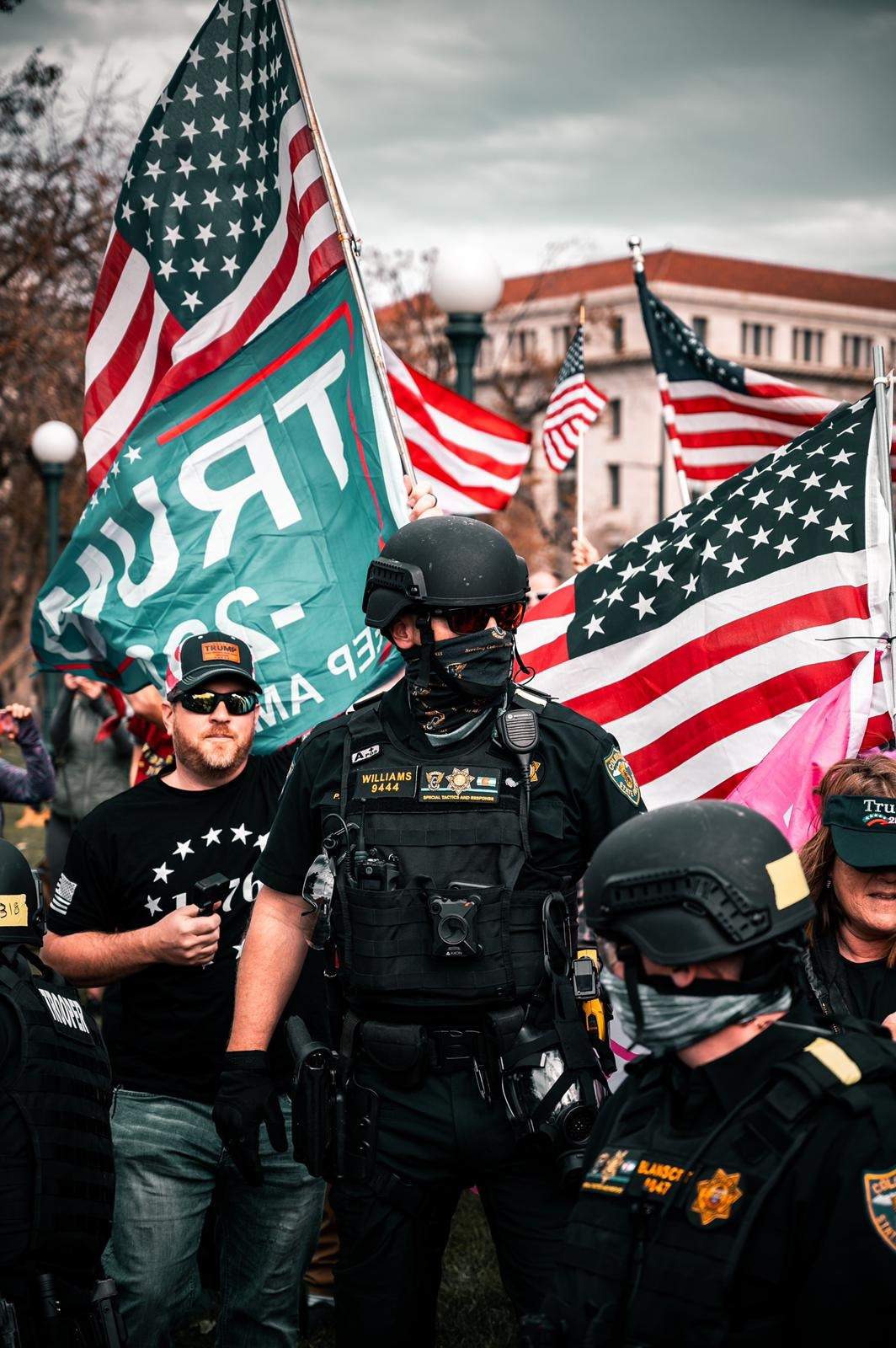 The Far Right’s Threat On and Offline

By: Zachariah Parcels and Lucia Santabarbara.

A United Nations (UN) report in July 2020 by the Security Counterterrorism Committee (CTED) showed a 320 per cent increase over the past five years in attacks by individuals and groups holding right-wing (RW) extremist ideas. The phenomena known as right-wing or far-right extremism is evidently becoming ubiquitous in nature, accelerated by the ever-increasing exchange of online content on social media platforms and imageboards. This article, thus, intends to briefly explore far-right extremism, how it might be defined, the role of the Internet, and the so-called “Lone Wolf” factor. There are various international initiatives that will be touched on to combat this cancerous, heterogeneous movement.

What is far-right extremism?

Scholars and policymakers amalgamate ethnically-, racially-, and gender-based political violence, and various anti-liberal ideologies to define right-wing extremism (RWE). RWE’s heterogeneity translates to problematic umbrella definitions that are not necessarily categorically helpful. Nevertheless, many have attempted to address these conceptual challenges. For example, it might be conceptually useful to frame transnational RWE networks as internal revisionist challengers to the Liberal International Order.

Right-wing extremism (RWE) includes a swath of actors with differentiating beliefs and subcultures; these actors do not necessarily agree with one another or converge. Brenton Tarrant, who carried out the terrorist attack in Christchurch, New Zealand, exemplified the transnational nature of RWE. He wore a patch representing the Azov Brigade, a white supremacist paramilitary group fighting in Eastern Ukraine. He also supposedly interacted with and was evidently inspired by the Norwegian terrorist, Anders Behring Breivik, who carried out a car bombing in Oslo and a mass shooting on Utøya at a Labour Party youth camp.

RWE incorporates ideas such as ultra-nationalism, radical traditionalism, and neo-Nazism. In the United States (US), the Anti-Defamation League (ADL) perceives RWE dichotomously: there is the white supremacist sphere (the “alt-right,”neo-Nazis, and “racist skinheads”) and the anti-government extremist sphere like the radical militias and the sovereign citizens. ADL also highlights various single-issue movements on the fringes of mainstream social conservative movements that adopt extreme stances, such as anti-immigrant and Islamophobic sentiments. However, there is some intersectionality in the RWE phenomena that is helpful in conceptualising and addressing these ideologies.

There also appears to be shared catalysts in the rise of and a distinguished modi operandi among the various streams of the far right. The far right narratives share a collective memory of infamous events that justify their anti-government positions, namely the Ruby Ridge Standoff (1992), the Waco Seige (1993), the Brady Bill (1994) under former President Bill Clinton (perceived violation of their second amendments), and the Oklahoma City Bombing (1995) carried out by Timothy McVeigh. Two watershed moments further catalysed the rise and normalisation of various far-right notions, possibly unwittingly through political pandering. The election of President Barack Obama (2008-2016) created a nativist and white supremacist counter-reaction while the Presidency of Donald Trump (2016-2020) witnessed the normalisation of nativist, anti-government, anti-liberal, and antisemtic notions, individuals, and groups. For example, Trump infamously refused to denounce the far right and right-wing militia: “... Proud Boys, stand up and stand by…” The Proud Boys, one of many emerging organisations propagating far right notions, was founded by Gavin McInnes and have adopted various misogynistic, Islamophobic, transphobic, anti-immigrant, and, recently, antisimitic stances. The far-right have seemingly embraced Louis Beam’s notion of the “leaderless resistance” - a modi operandi known as “Lone Wolf” terrorism today was discussed as an alternative to a centralised hierarchy at an notorious RWE meeting at Estes Park, Colorado in 1992. This meeting is also perceived as the birthplace of the modern American militia movement.

The Internet and the “Lone Wolf” Risk

Individuals and groups espousing RWE ideologies have an exponentially growing online presence. This growth is being catalysed by the dissemination of conspiracy theories and disinformation that form or galvanise “enemies” in the COVID era’s anti-government zeitgeist. As illustrated through Raffaello Pantucci’s study of Breivik, the internet plays a focal role in disseminating extremist ideologies. The internet actualised Beam’s dreams of a “leaderless resistance” by inciting or mobilising individuals to violence, specifically to act as “lone wolf” terrorists. This was exemplified by Breivik in Norway, Alek Minassian in Toronto (2018), and Brenton Tarrant in New Zealand (2019). Boaz Ganor defines the latter as when one perpetrates a terrorist attack on their own or with the assistance or involvement of others, but without operational ties to any terrorist organisation. Beyond the essentiality to impede online mobilisation to violence to curb this “leaderless resistance,” studies have found that the far right are more likely to learn and communicate online than Jihadist-inspired individuals. Thus, there is plenty of impetus to combat far-right extremism online.

The events before, during, and after the storming of the US Capitol building on 06 January 2021 further illuminates the crucial role the cyber domain is playing in RWE recruitment and propaganda initiatives. The planning and logistical organisation behind the Capitol Hill violence were via social media platforms. They were supported by the spread of disinformation and nationalist propaganda, such as through Telegram, Twitter, and Facebook. Operational information - namely the best times and methods to conduct the attack - were shared on social media months before. Precise details about the streets to take and paths to tread to avoid police checks were disseminated beforehand.

Many governments, and public and private entities have undertaken initiatives and practices to counter RWE online extremism to avoid such expressions of far-right extremism. One such initiative to counter RWE online content followed the abhorrent events in Christchurch in March 2019. New Zeland Prime Minister Jacinda Ardern’s government together with French President, Emmanuel Macron, launched the Christchurch Call with high-tech companies and social media platforms to eliminate terrorist and violent content from social media sites. This initiative was followed also by a severe condemnation by United Nations General Assembly (UNGA) towards “acts of violence based on religion or belief,”alluding to Tarrant’s targeting of Muslim worshippers in Christchurch. On the 2 April 2019, the UNGA released the Resolution Combating terrorism and other acts of violence based on religion or belief, denouncing “the heinous, cowardly terrorist attack.” On 09 October of the same year, after the deadly attack on a synagogue and murder of a regional Christian Democrat (CDU) governor by far-right extremists, Germany approved the Network Enforcement Act. This act aims at preventing the dissemination of far-right online content and combating online hate speech and fake news. A provision also requests social media networks (with more than 100 complaints) to publish biannual reports to clarify how they dealt with complaints about illegal content. Lastly, the Global Internet Forum to Counter Terrorism (GIFCT) - a partnership between the European Union (EU) Internet Forum, Meta, Microsoft, Twitter, YouTube, civil society and academia - was initiated in 2017. The GIFCT adopts a global synergic technological approach based on knowledge sharing and joint research to prevent terrorists and violent extremists from exploiting digital platforms.

​​In conclusion, it appears that these challenges to liberal values and public safety demand innovative and persistent approaches. The cyber domain is continuously being exploited to radicalise and propagate far-right, anti-government narratives. Therefore, effective governmental responses - especially in the form of counter-narrative and public resilience initiatives - need to continuously adjust to these dynamic and adaptive revisionist challengers.