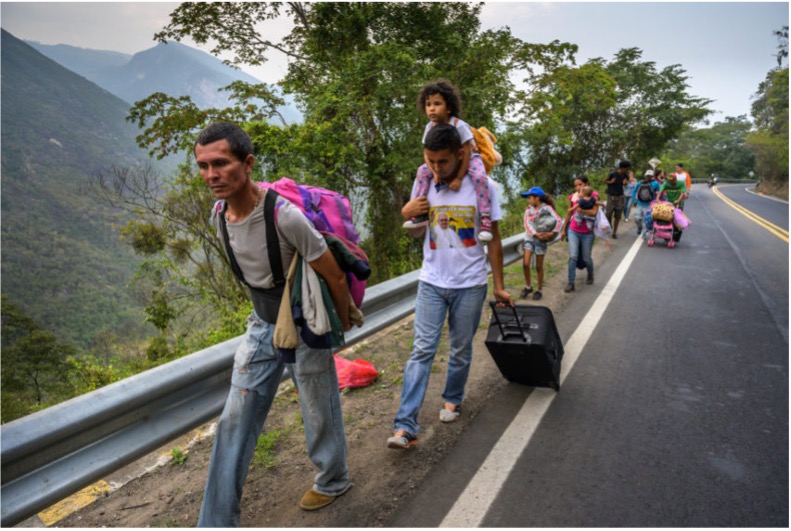 Venezuelan Migration Crisis: What are the root causes, trends and consequences for the region?

The Venezuelan exodus qualifies as the largest forced displacement of people in the history of Latin America and the second one after the Syrian crisis at the global level. Since 2014, important fluxes of migrants, refugees, and asylum seekers from Venezuela to other Central and Latin American countries have destabilized the region. This critical situation - aggravated by the pandemic crisis- persists despite the attempts made by various national governments to legalize migrants’ status. Indeed, the inability of receiving countries to adopt adequate and effective measures is leading to social unrest throughout the region and threatening the social cohesion of the region.

How did we get to the current situation?

The political turmoil and the socio-economic instability of Venezuela are among the root causes of the huge population outflow, the largest external displacement crisis in Latin America in recent years, according to the United Nations migration organization. Indeed, since 2014, more than 6 million migrants, asylum seekers and refugees have fled the country looking for a better life, food, and work.

In the last decade, the national economy has been in crisis and the healthcare system lacking funds: it caused an alarming increase in infectious diseases, unemployment, hunger and malnutrition, and maternal and child mortality. Since May 2016, Venezuela has been governed under a state of exception, meaning that wide and discretionary powers are in the hands of the president. As a result, armed forces and police have excessively and extensively used force and arbitrary detention during demonstrations. In May 2018, Nicolas Maduro won a heavily disputed election, followed in January 2019 by the self-proclamation of the leader of the National Assembly Juan Guaidó as president. Internationally, the United States and other fifty governments around the world have recognized Guaidó as the legitimate president; conversely, China, Russia, other countries and the Venezuelan military have stood with Maduro, who has true executive and legislative powers in his hands.

In the last years, hyperinflation, shortages in food and medical care, and violence have led to a deep humanitarian, health and economic crisis, enhanced by the ongoing leadership conflict and the government’s inability to provide adequate social services. These highly unstable conditions continue to represent relevant push factors behind Venezuelan migration.

What are the trends of Venezuelan migration?

Most Venezuelans are fleeing to neighboring countries, thus around 80% of them are hosted by countries throughout Latin America and the Caribbean. They reach their destination through diverse routes, by land, plane, or sea, in many cases crossing the borders illegally and facing the concrete risk of being victims of smuggling and human trafficking. A high number of Venezuelans has reached the coasts of the Republic of Trinidad and Tobago: while hosting a smaller number of migrants in total, the island has received the most in relative terms. This results in intense competition for employment and poses an important challenge to national institutions.  The island has not offered refugees a special temporary status; however, it has developed a refugee policy with United Nations High Commissioner for Refugees’ (UNHCR) and non-governmental organizations’ support. The highest concentration of Venezuelan migrants is in Colombia, where more than 1.8 million of them have relocated; Peru, Chile and Ecuador follow, in order.

The Venezuelan crisis consists mostly of migrants and refugees fleeing threats of violence: hundreds of thousands of Venezuelans have received legal asylum in their new host countries, around 2 million people have residency permits or some other document to stay regularly in the country of destination, but over a million and a half are undocumented or at risk of being so.

How have neighboring countries reacted to the exodus?

Countries in the region have generously opened their borders, providing Venezuelans with access to healthcare, education and employment. Legally speaking, the asylum systems of the region were soon overwhelmed making the process for obtaining the refugee status long and slow: as a result, several countries of the region have opted for temporary residence permits and visas to allow Venezuelan migrants access to work and public services. Besides this effort, many Venezuelans remain undocumented.

Colombia represents a highly discussed case considered an example by the European Union and the international community. Indeed, in February 2021, the president Iván Duque presented the draft of a decree for the temporary protection of Venezuelan migrants, a measure to allow legal permanence in Colombia for almost 1 million Venezuelans who were illegally in the country.

Enlarging the focus to the whole region, various hypotheses are under discussion. Firstly, the possibility to recognize Venezuelans as a group as refugees- on the basis of the Cartagena Declaration- is considered. This legal document is non-binding and offers guidance to the states of the region to develop their refugee protection frameworks. This decision would expand protection and expedite the asylum process. Secondly, the creation of a legal document aimed at facilitating the movement of Venezuelans within the region is on the table.

The influx of Venezuelan migrants into host countries has destabilized their internal order, placing considerable strain on the health and education systems, and increasing the competition for employment. Unstable social cohesion leaves room to the concrete risk of an explosion of xenophobic sentiments among locals. Indeed, as the number of Venezuelan people in neighboring countries increased, it inflamed tensions and increased the pressure on governments to adopt restrictive migration measures, which would have a domino effect. Moreover, as the case of Colombia demonstrates, many Venezuelan minors are exposed to job and sexual exploitation and risk being involved in criminal activities by some local criminal groups. It is estimated that around 40% of Venezuelan minors living in the country are out of the formal education system and that the majority of them suffer violence and are forced to work for some local criminal groups.

Latin American and Caribbean countries are facing social and economic challenges due to an important influx of Venezuelan migrants, and their institutions, security and social cohesion are at stake. Hence, hosting countries need international assistance to protect Venezuelans and provide them with emergency relief, as well as a better-coordinated strategy throughout the region to face the challenges of developing and implementing far-sighted and long-term integration and inclusion policies.