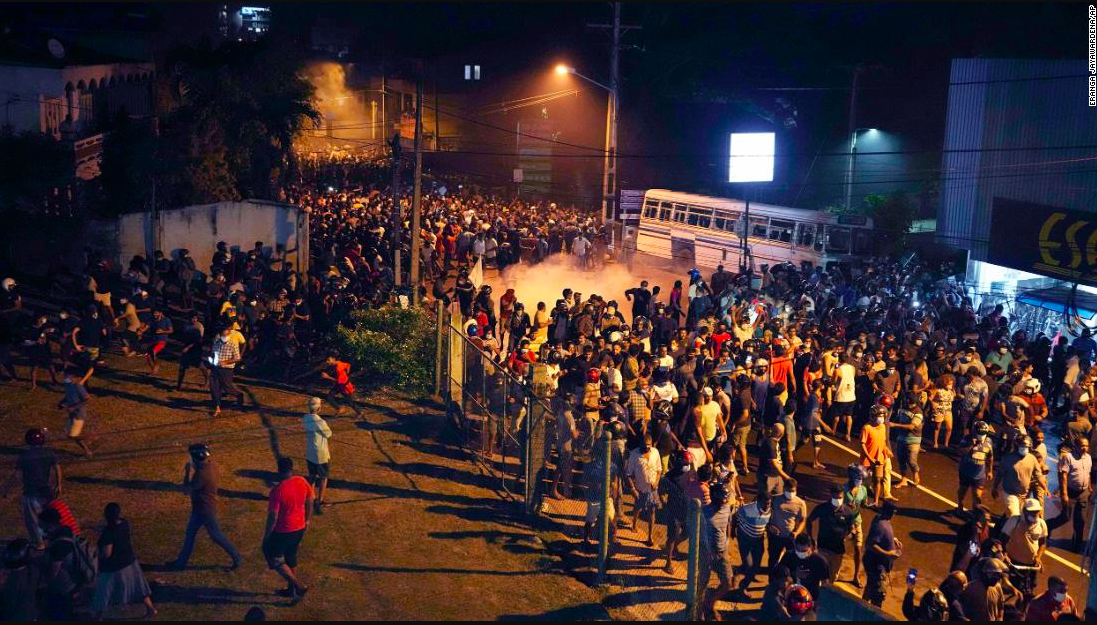 Since 2019, Sri Lanka has been experiencing its worst economic crisis. Unprecedented levels of inflation, the near depletion of foreign exchange reserves, the rising prices of basic commodities, daily blackouts lasting ten to thirteen hours, and shortages of medical supplies plague the already poor nation. Sri Lanka’s population of almost 22 million people now waits in nearly endless lines for basic amenities. Schools have been suspended because of the lack of equipment and businesses shut down because of the lack of petrol needed for commuters and the transportation of goods.

Declared the "worst economic crisis for Sri Lanka in 73 years" by the Sri Lankan Government, the country now finds itself embroiled in protests and steadily increasing violence. Protesters place blame on president Gotabaya Rajapaksa's government, whom they accuse of mismanaging the economy. The Rajapaksa are Sri Lanka's most influential family, a political dynasty, prominent in several senior roles in the Sri Lankan State. Protesters demand that Rajapaksa and his family step down, hoping to pave the way for new democratic leaders.

Understanding Sri Lanka's turmoil and the regional fallout are vital to understanding the current state of South Asian security and diplomacy. There are several reasons for Sri Lanka's current unrest, ranging from president Rajapaksa's tax cuts, Sri Lanka's significant foreign debt, the ongoing agricultural crisis, and the tourism fallout over the 2019 Easter bombings and COVID-19. Finally, Sri Lanka's second-largest market for tea exports, Russia, has been ostracized by the international community in the wake of their invasion of Ukraine. Sri Lanka depends heavily on tea exports, with 17% of its economy relying on it completely.

The first security concern comes in the form of Chinese regional ambition. While Sri Lanka is not massively indebted to China (only about 10% of the Sri Lankan debt stock is owed to China), the Rajapaksa government has stated it will appeal to China to ease its debt burden. Given China's history of debt-trap diplomacy, and its continued influence on political and economic spheres of affairs throughout the continent, cosying up to China could spell danger for Sri Lanka and the region.

Sri Lanka has already given up a port to the Chinese ambition. Under pressure from China regarding debts, Sri Lanka coughed up the Hambantota Port and 15,000 acres of land surrounding it. China now controls a piece of territory just off the shores of its main regional rival, India. China's ambition in Sri Lanka does not stop there. China's Belt and Road Initiative (BRI) has invested $1.4 billion in the Colombo Port City project, the largest ever foreign investment in Sri Lanka's history.

China has utilized the BRI as a form of neo-colonialism, using it to debt-trap poorer countries while exploiting those same countries for their raw resources and control over the infrastructure. With the presence of China in Sri Lanka already, and the current economic crisis, the Chinese are poised to take advantage of the situation by further exploiting the poorer island nation.

Easter Sunday, three years ago, three churches and three luxury hotels in Colombo were targeted in a series of coordinated Islamist terrorist attacks carried out by the National Tawahujja Jama'ath (NTJ). The attack killed 269 people, injuring at least 500 others. NTJ is believed to have connections to the Islamic State (ISIL). Terrorism in Sri Lanka has existed for some time. Organisations such as the Tamil Tigers and various Marxist-Leninist parties have carried out attacks in the past. Islamist terrorism began to rise in the 2010s, with a steep rise in attacks against the country's small Roman Catholic minority. These attacks eventually culminated in the 2019 Sri Lanka Easter bombings.

Sri Lanka's Islamic population, called Moors, is not large, accounting for roughly 9.7% of the population, and they have historically faced significant persecution by the Buddhist majority. Following the defeat of the Tamil Tigers in 2009, there has been a steep rise in anti-Islamic sentiment in Sri Lanka. Bhavani Fonseka, a human rights lawyer, spoke to the BBC about the issues, saying "in the post-war period, Muslims have become the new enemy." Muslim Sri Lankans, who already face discrimination from the government and who have a sudden rise in extremism within their community, are now staring down the barrel of the ongoing economic crisis.

Studies have shown that there is a connection between poverty, economic minority discrimination, and domestic terrorism. The ongoing economic crisis will exacerbate the divide between the Muslim and Christian minorities and the Buddhist majority. With the crisis worsening, Sri Lanka can expect a dramatic rise in Islamic terrorist attacks from well-trained, ISIL-affiliated organisations like the NTJ.

This rise in terrorism is not just a domestic issue either. Malaysia, Indonesia and the Philippines have seen their shared maritime border exploited by Islamist terrorists seeking to supplement conflict zones in Southeast Asia with foreign fighters. The Philippines' large Islamist problem has crossed the maritime borders and is beginning to affect its neighbours. Sri Lanka shares a maritime border with Maldives and India, two countries that could face the fallout of rising Islamic terrorism within Sri Lanka. As the economic crisis continues, and Sri Lanka finds itself unable to support its military and police structures, terrorists and criminals will leak through the porous borders.

In an increasingly globalized and interconnected world, the economic downward spiral of a small country can still have a great effect on the world at large. For South Asia, Sri Lanka's crisis can be a catalyst for significant shifts in the area's power structure, a rise in terrorism, and the opportunity for powerful countries to gain a further foothold in the region. This article has highlighted some of the ways Sri Lanka's ongoing crisis could do significant damage to South Asia, but there are undoubtedly other issues, such as international criminal organisations, which were not addressed. If you'd like to learn more about security concerns in South Asia and elsewhere, click here to view more of ITSS Verona's articles.

This article also mentioned the Belt and Road Initiative (BRI), which is an economic infrastructure development strategy adopted by the Chinese Government in 2013. It has been considered a centrepiece of Xi Jinping's foreign policy, but many opponents of the strategy consider it a way for China to practice debt-trap diplomacy and neo-colonialism. If you'd like to learn more about the BRI and China's foreign policy, check out this ITSS member series article.